Sorry, you need to enable JavaScript to visit this website.

Bribe giving and receiving is an offense

“ ELCOT is an ERP Driven Office ”

While the Electronics Corporation of Tamil Nadu has drawn up technical requirements for laptops to be distributed as part of the free-laptop scheme, there are likely to be changes in software specifications over the coming days. “The technical and price bid that will be out soon will reveal the change in specifications. The government is attempting something, that no one has thought of so far,” said IT minister R.B. Udaya Kumar.

“We want the laptops to be equipped with the best software, hardware and applications, so that they can be a life time possession for students. We will make sure everything is considered before the final decision is made.”

The Government will start distributing free laptops for students, promised in the AIADMK election manifesto, from September. The target group of beneficiaries as promised in the AIADMK election manifesto included all students in arts and science colleges, engineering colleges and polytechnics, but discussions are on to widen the coverage. Higher secondary school students may also be given laptops, according to sources. Last week, the Electronics Corporation of Tamil Nadu (ELCOT) floated a global tender, seeking rate contract for 9.12 lakh laptops.

The government intends to provide 68 lakh laptops to students over the next five years that could cost nearly Rs.10,200 crore at the rate of Rs.15,000 per piece. The State has frozen the hardware requirements (see box); and the software component so far includes a dual-booting component, running Windows Starter edition and Linux (Tamil). The proprietary software comes licensed for a year, and with anti-virus support. Suppliers have also been asked to load the laptops with education-oriented applications, both on the Windows and Linux packages. The Free and Open Source lobby has expressed concerns about introducing proprietary software that is licensed for merely one year.

S. Shanu, Convener, Free Software Foundation, Tamil Nadu, pointed out, “Students will have to either pay to renew the licence every year or use a pirated version.”

Besides, the software package for these many devices is bound to cost the government a considerable sum which can be saved by using free software alone, say activists. Only free software like GNU/Linux allows students to manipulate and customise software; and such a rich library of free educational software applications is not available on any proprietary software platform. Such ability to manipulate, experts say, is must for implementing progressive learning methods to education recommended by the National Curriculum Framework 2005.

“What students require is a secure operating system with applications which they can dabble with. Free software alone would help promote a culture of learning, sharing and innovating,” explained M.R. Rajagopalan, director, Centre for Development of Advanced Computing.

Sources at the IT Department said a team of experts from Anna University, School Education Department and ELCOT is working on the required specifications.

“We are getting open source applications for less than half the cost of proprietary software, but uncertainties over insurance and warranty are why both operating systems are being offered,” says an official. 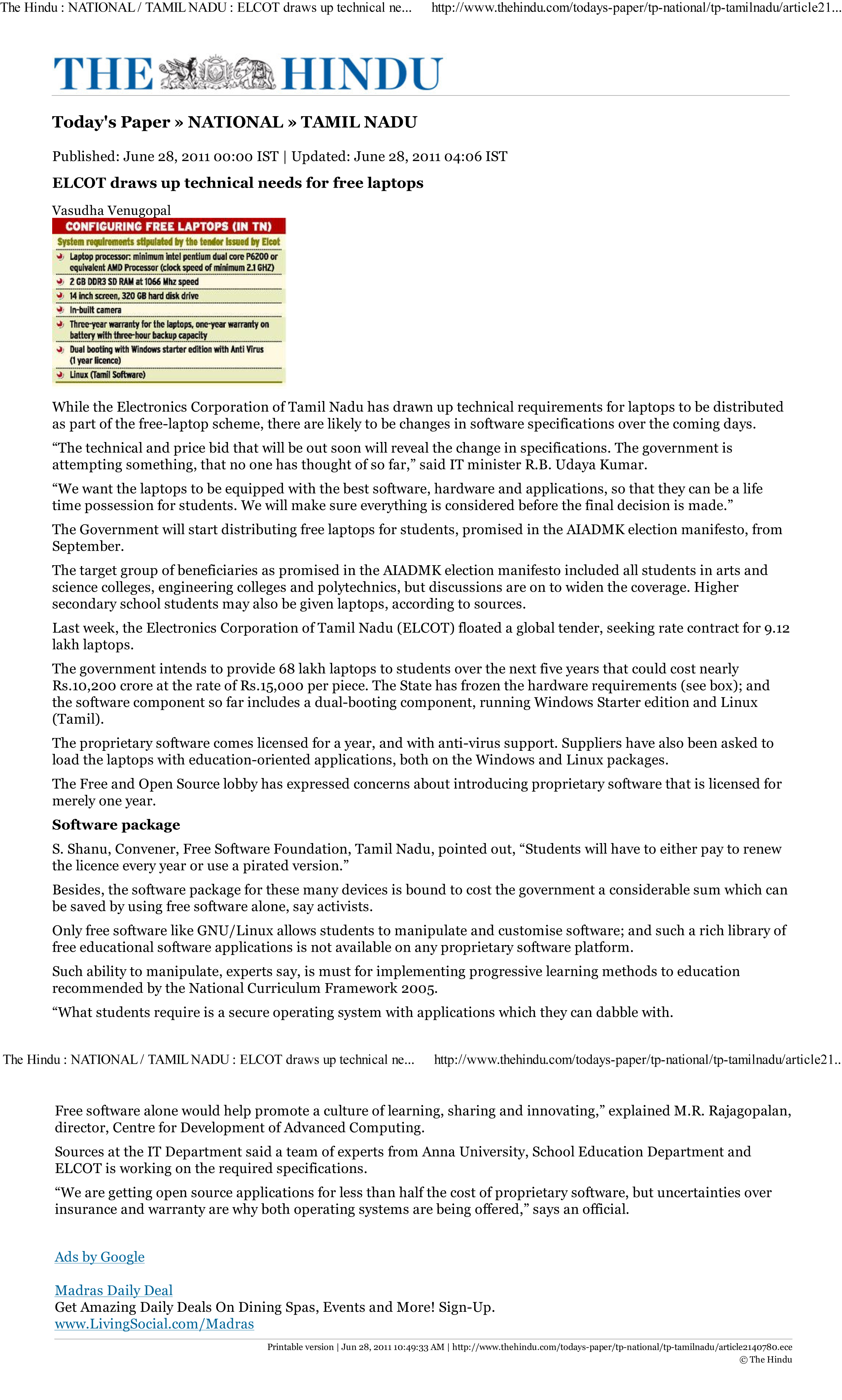