With mixers, grinders and fans for housewives, the AIADMK government is also getting ready to distribute 68 lakh free laptops to students from September 15. The state-run Electronics Corporation of Tamil Nadu (Elcot) has floated an international competitive tender for sourcing 9.12 lakh laptops in the first phase of the scheme, which is spread out over five years.

It is interesting to note that the corporation has directed manufacturers to burn the state government's logo on the chip so that it is displayed when the machine is switched on. "We have done this to prevent misuse of the laptops, such as unauthorised sale or diversion into the open market. The firms should incorporate onscreen display of the TN government logo," an Elcot official told TOI. "The design and layout approval should be obtained from Elcot before production," he said. In the earlier DMK regime, there were widespread allegations that the free colour televisions distributed to the poor had found their way into showrooms.

With the laptops expected to make a further dent on the state coffers, already burdened by the huge freebie expenditure, officials said the government might look at a base price of Rs 15,000 per unit. "They will try to drive down prices further as they are purchasing in such large volumes," said an Elcot source. In her memorandum to Prime Minister Manmohan Singh seeking financial aid for the slew of welfare schemes, chief minister J Jayalalithaa had said "the total financial implication" for distributing 68 lakh free laptops worked out to approximately `10,200 crore. A senior executive of a PC manufacturing firm said, "Given the configuration specified by the government, a laptop would cost approximately $500 (`22,5000). But given the volumes, the price should not exceed $300 (`13,500)." Over the next five years, the state government hopes to provide more than six million laptops to students. The basic features the government is looking for in the laptops include an Intel Pentium dual core processor with clock speed of minimum 2.1GHZ, a computer RAM memory of 2GB and a hard disk memory of 320 GB with mobile Intel chip set. The computer will be loaded with Tamil software complying with the Unicode standard.

According to the Elcot tender document, the first batch of supply is expected to commence from September 1. The laptops will have a warranty against any manufacturing defect for a period of 36 months from the date of supply. With the government targeting rural and poor students, Elcot hopes to provide them training to handle the laptops. 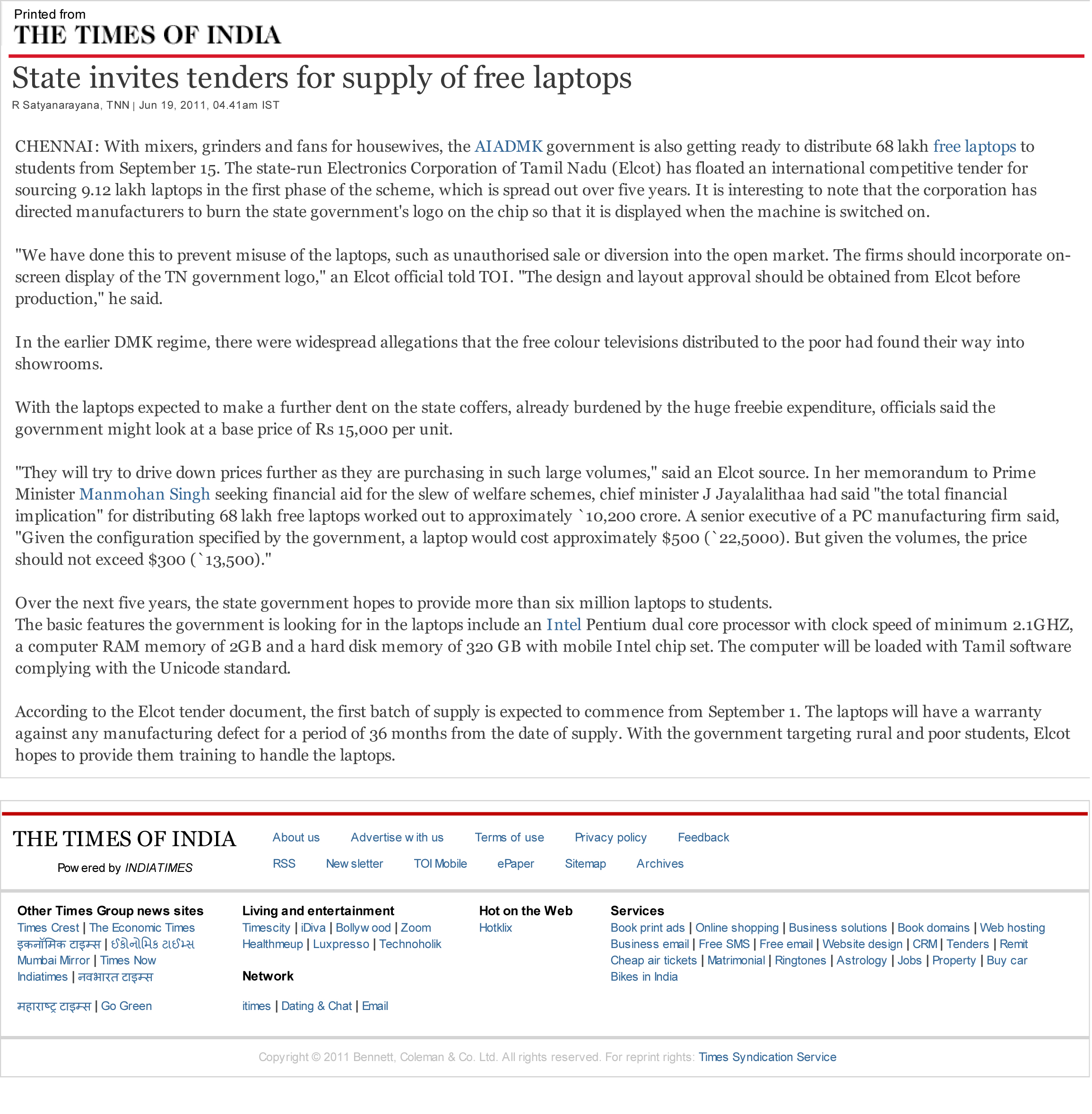